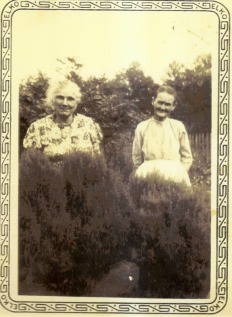 In the 1900 Census for Lawrence County, Arkansas lists Margaret living with her Mother Susan Howard (listed as a widow), her husband Thomas Goodman, a sister Leona, a brother John W. and Margaret & Tom's three children, Henry, Zena and Taylor.
Notes for THOMAS A. GOODMAN:  Lawrence County Historical Society, Spring 1983, Volume 6 Number 2
Families Who Settled Here During The First 50 Years:  In our first article Joseph G. Taylor named 13 families, who lived west of the town of Smithville, when the area was in Arkansas Territory. According to W.E. McLeod's history of Lawrence County, about 1840 the county, then including Sharp, opened another road east, crossing the Military road branch in Smithville. This caused the county to be settled rapidly with emigrants coming from Tennessee, Kentucky and North Carolina, and Smithville became an important trading and social center. Names of families, who lived in town in 1837, are not available. Some families, who lived in town during the first 50 years, were the SLOANS, FISHERS, BARNETTS, BABERS, SELFS, CHILDERSES, LONGLEYS, HENDERSONS, STEADMANS, GOODWINS, RANEYS, DAVISES, RUDYS, OGDEMS, WRIGHTS, HOLTS, BURNSES, THORNSBURGS, THORGMORTON and TOWNSENDS.

Some of these were descendents of the pioneer families. Living in nearby country and many not named by Mr. McLeod or Mr. Taylor were the JONESES, NEWTONS, MILLERS, WHITES, FOLEYS, TODDS, TOWNSENDS, COFFMANS, PERKINSES, HOWARDS, BEYERS, and WHITLOWS. Also FORTENBERRYS, PEEBLES, KENDALLSs, BILBREYS, FIELDS, TURNBOWS, BOBOS, GOADS, JUSTUSES, GIBBENS, BRATCHERS, and ALENXANDERS. On, or nearby on the new road east, were the DUNGANS, BAKERS, MOORES, JUDKINSES, BORAHS, WASSONS, LANES, McLEODS, McGEES, LEES, SMITHS, ROWSEYS and WAYLANDSs.

Two of the men swam the Mississippi to get here, a family came in a covered wagon pulled by an ox and a horse, and others came in covered ox wagons. Sixty-five family names have been listed and fortyfive of them are known to have descendents living in the Lawrence County at this time. (1984).

Some businesses established during this time were Bobo and Sloan, Thorgmorten, Sloan and Marshall, Eli Thornburg, J.H. Townsend, Printers and Book Seller, Sloan and Henderson, Brady and Son, and Rudy Drug and Mercantile. One early merchant was "a respected slave, `Uncle George', owned by Peter Holderman. He ran a little bakery in a log house in town.

These families organized three churches in a log school house and two had good frame buildings erected. Subscription schools in the log school house progressed to a large one room frame building built by Jasper N. Hillhouse in 1872 on land donated by W.C. Sloan. He taught subscription schools until 1874, when the state constitution provided for schools to be supported by state taxes and local district taxes. 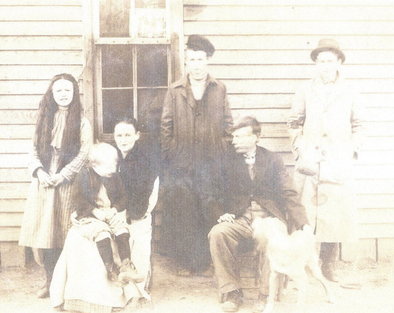 Maudie, Andrew, Margaret, Taylor, Dock and Curtis
JOHN WESLEY HOWARD (TAYLOR) was born December 10, 1888 in Mammoth Springs, Arkansas, and died January 13, 1971 in Arkansas. He married ANNIE CORBITT July 04, 1915 in Jackson County, Arkansas. She was born March 31, 1892, and died July 14, 1975 in Arkansas.  JOHN W. HOWARD and ANNIE CORBITT: Burial: Ballews Chapel Cemetery, Grubbs, Arkansas.   World War I registration card stated that John was living in Grubbs with his wife and child on June 5, 1917 (date he registered).  His WW II registration card showed that he was living  at R.F.D. 2, Newport, Arkansas, farming for self in 1942.