GOODMAN was born in Kentucky. He married POLINA JOSLIN SPRADLIN. She was born 1842 in Mississippi.

Polina was my great-great grandmother, born in Mississippi in 1842.   She married John McMurray Spradlin in White County, Arkansas September 29, 1865. Arkansas.  She later married a Goodman, moved to Missouri and later moved back to Arkansas sometime after 1874.    Her first husband John Spradlin died in 1871 and she somehow ended up in Missouri. This is where she married Goodman and had Thomas in 1874, but, by the 1880 census she was a widow again.

The only other references to Polina Goodman were found where she sold or donated some swamp land to the state of Arkansas.   Polina was also found in the Sharp County records as giving consent for Thomas A. and Margaret Howard to be married in August 1892.  She would have been 49 at that time.

The youngest son of Polina Goodman is Tom Goodman, who is my great-grandfather born in May of 1874 in Missouri.  On the 1880 Sharp County Census, he is listed as living with his mother, Polina and his 3 half-brothers and one half-sister. His father is listed as having been born in Kentucky.

The next reference to Tom Goodman is in the Sharp County newspaper in April of 1891: "On Tuesday of last week an affray occurred between J.W. Roberts and his son John, on one side and William Spradling and his half-brother Tom Goodman, on the other, in Sharp County, near Hazel Grove, and about two miles from the Independence County line, which produced some very serious results.  Spradling is a young man and a renter from Roberts and some ill feeling had existed for some time between them.  On the day mentioned, as we gather it, Roberts and his son went to the field where Spradling and Goodman were picking cotton.  Spradling and the younger Roberts became involved in a fight and Goodman interfered to separate them, when the elder Roberts shot him with a pistol.  The ball entered the left side, just below the heart, and passed across and almost out at the right side.  Roberts then tried to shoot Spradling, but shot his own son through the hand.  With this the fight ended and Roberts and his son fled.  Goodman was removed to the house and a physician summoned.  It was thought for a time his wound was fatal, but he is improving and it now believed he will get well.  The shooting created intense excitement in the neighborhood and the people turned out en masse to capture Roberts and his son, but they have made good their escape.  Roberts removed to Sharp County three years ago from Missouri.  He is an industrious and successful farmer, but an irascible and high-tempered man."

Later this same year 1891, Tom Goodman and Margaret Howard went to the court house in Sharp County to get a marriage license which was denied.  Possibly due to Tom being 17 and Margaret only 14.  In August 1892, the next year, Polina Goodman (Tom's mother)  signed for them to get married, in which they did on August 7, 1892.  Margaret would have been 5 months pregnant with Henry at that time.  Oops!
(Marriage license)

Tom and Margaret are found on the Sharp County Census of 1900 as living with Susan Howard (Marget's mother) along with their three children: Henry - born in December 1892,  Zena - born in October 1895 and Taylor - born in January 1898.

Two other children were born to Tom and Margaret:  Curtis after 1900 and Maudie L. - born in August 1904.  Margaret remarried Dock Laird in March of 1909.  Which would mean that something happened to Tom Goodman between 1904 and 1909.  He would have been 30-35 years of age at this time.  No further records have been found. 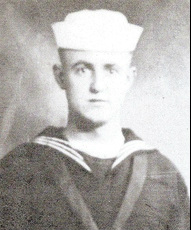 Taylor Goodman
Taylor Goodman was my grandfather.  The first reference I can locate of Taylor Goodman is in the 1900 census for Sharp County.  In this census, he is only 2 years old, living with his grandmother, mother, father, a brother and a sister in Reeds Creek Township.

The story is that Taylor went off and joined the Navy after a girl had become pregnant and they didn't want to get married.  So, he joined the Navy and went away for a while.  In the Navy, Taylor served as a cook.

After returning home, Taylor spent time with Curtis (his brother) and Willis Kinard (who happened to be Polly Guffey's cousin).  Polly had been recently widowed and left with 4 boys and one girl under the age of 10 to raise.  Robert was 9 when his father passed away and Doyle was only 8 months old.

Taylor had been in the Veterans hospital in Little Rock for a while.  Coming home, he went right back to work in the fields.  When he died, he was working cleaning the fields with Uncle Andrew and just sat down with a pitchfork in his hands and his life was over.

Appeared in the Newport Daily Independent, Tuesday, May 19, 1959:
TAYLOR GOODMAN, of Tuckerman, Dies at Home
Taylor Goodman, Tuckerman, died Monday at his home.  He was 61.  A member of the Freewill Baptist Church, he was born at Strawberry January 17, 1898.
Survivors include his wife, Polly; three sons, Orden Goodman of Converse, Indiana, L.C. Goodman of Tucson, Arizona, and Luther Goodman of the home; one daughter, Mrs. Nathan Lassiter of Converse, Indiana; a sister, Mrs. Tom Boaz, Tuckerman; a half-brother, Andrew Laird of Tuckerman; four step-sons, Robert Guffey and Albert Guffey, both of Tuckerman, Woodrow Guffey of Route 2 Newport, and Doyle Guffey of Cash; a step-daughter, Mrs. Gladys Turner of Paragould; 42 grandchildren and 26 great-grandchildren.
Funeral services are incomplete and will be announced later by Dillinger Funeral Home.

Appearing in the paper the next day:
TAYLOR GOODMAN Dies Suddenly at Work in Field
Taylor Goodman, aged 61, prominent farmer in the Denton Island community for many years died suddenly late Monday afternoon while working in a field near his home.
Mr. Goodman had recently undergone major surgery in a Memphis hospital and was yet in the process of convalescence at the time of his death.  He was in the field with a step-brother, Andrew Laird, who was using a tractor, Goodman was piling chunks and burning them.  Laird drove the tractor out of the field at quitting time, thinking that Goodman had already gone to the house.  When entering the Goodman house a short time later, Laird was told that Goodman had not come home.  Returning to the field where they had been working his body was found where he had fallen.
Mr. Goodman was veteran of World War I and a member of the Freewill Baptist Church.  He was a native of Strawberry, Arkansas, and had lived in Jackso County most of his life.
Funeral services will be held Thursday at 2:00 p.m. at Ballews Chapel conducted by B. Woodruff.  Burial will be in Ballews Chapel Cemetary under direction of Dillingers Funeral Home.
Pallbearers will be Luther Ferguson, George Bradley, William Eudy, Robert Gifford, Loftin London and Cecil Pitts.

Children of MAUDIE GOODMAN and TOM BOAZ are: 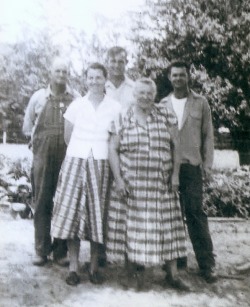 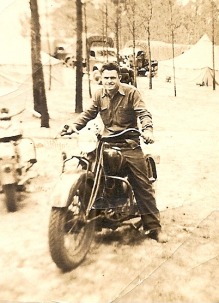 Child of WANDA BATSON and WINGO:
i.  WANDA WINGO 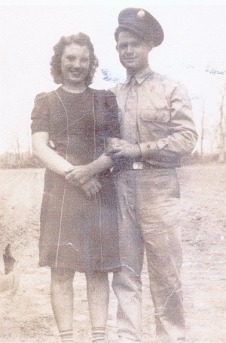 Henry & Wanda Goodman
Obituary for Henry Goodman:
Henry O. "Arky" Goodman - November 27, 1921 - May 5, 1999
CONVERSE - Henry O. "Arky" Goodman, 77, 305 N. Jefferson Street, died at 2:40 a.m. Wednesday in Marion General Hospital.  He was born in Jackson County, Arkansas to Taylor J. and Polly A. (Devore) Goodman.  Mr. Goodman married Wanda P. Batson on March 12, 1953.  She died October 17, 1989.  A resident of Converse since 1957, Mr. Goodman retired from General Motors Corp. in Marion and served as a corporal in the Army during World War II.  He was a member of Sweetser Wesleyan Church, the Veterans of Foreign Wars in Marion and Indiana and General Motors Sympathy Club.  Survivors include two sones, Ricky O. (Dorothy), Converse and Elva D. (Jesse) Keller, Everett, Washington; a daughter, Wanda (Mrs. Wilbur) Deeter, Converse; two brothers, Luke and Doyle, both of Tuckerman, Arkansas; three grandchildren and three great-grandchildren.  In addition to his wife, he was preceded in death by two sisters and four brothers.  Services will be 2 p.m. Friday in Larrison-Martin- Duncan Funeral Home, Converse, with the Rev. Dennis Willoughby officiating.  Burial will be in Converse Cemetery.  Friends may call from 2 - 4 p.m. and 6 - 8 p.m. Thursday at the funeral home.  Memorial contributions may be made to Converse Ambulance Service. 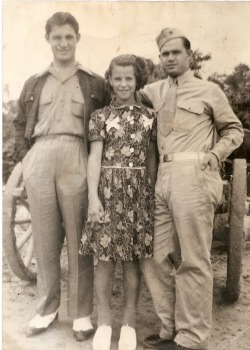 Picture taken in the early 1940's.  Parents: Taylor and Polly Goodman.  Picture taken by Daddy before L. C. and Henry left for the service. 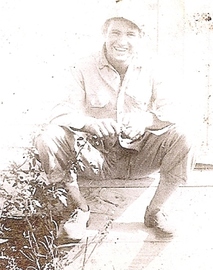 Look at all that curly hair.  Aunt Bernice told me she remembers combing Daddy's curly hair in the morning before sending him off to school.  See where Brenda got her curly locks.

Daddy told me that he remembers walking along side the wagon going into Tuckerman when he was young and once you passed Village Creek, it was all open fields.  The wind would blow so hard across the flat land that he would walk along side the opposite side of the wagon to keep out of the wind.  He said that Grandpa Taylor would take Neal into town in the wagon with him most of the time on Saturdays and he (Daddy) would stay home and help Grandma Polly with the laundry.

Inside Martha Pitts Bible, she had written: "Luther Harold Goodman, my son-in-law, was called to preach the Gospel of Christ, in the year of 1961.  He preached his first message at the Assembly of God Church at Sunny Valley, our home church, on September 10, 1961.  His subject was Faith with out works.  May God richly bless him in his ministry for him in my prayers.  His Mother-in-law, Martha Pittts."
"August 18, 1963: Luke began his first pastoral work at a little church in Chilsom.  He had his first baptism service in September 1963." 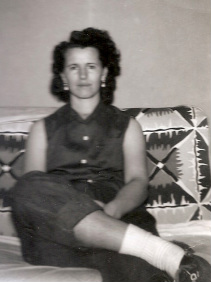 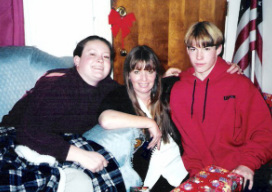 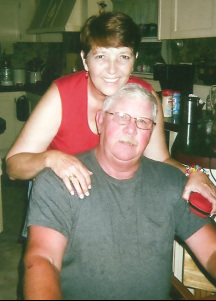 Children of BRENDA GOODMAN and DANNY VOYLES are: 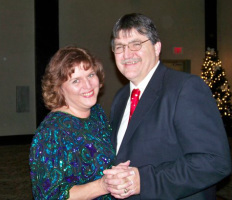 Children of LUTHER GOODMAN and DEBORAH GILLESBY are: 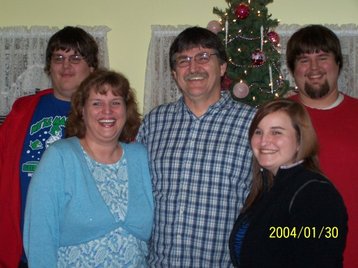 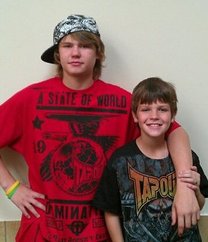